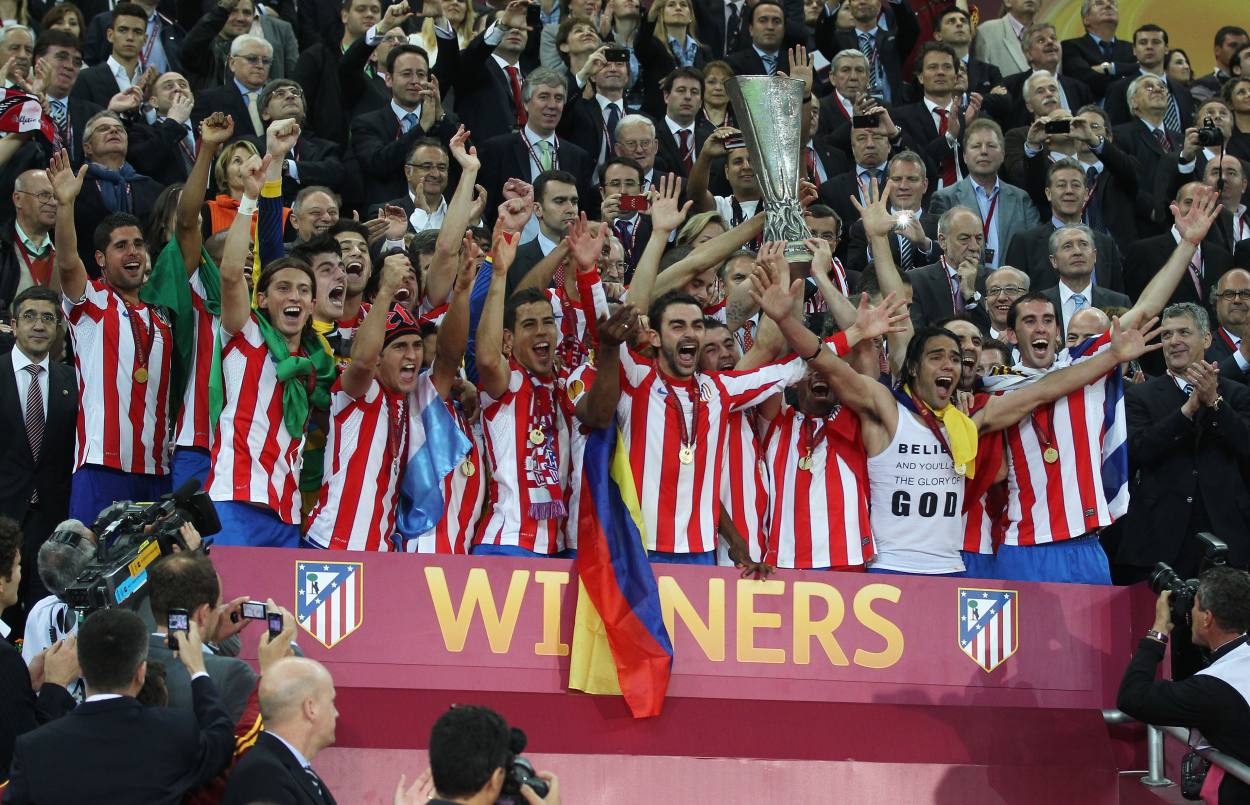 Founded in 1903 in the Spanish Capital city of Madrid, Atletico Madrid was a brainchild of three Basque students living in the city. They considered that the club would serve as a youth branch of Athletic Bilbao, which it did until it became a fully independent club in 1913.

Atletico Madrid is currently owned by the majority shareholder Miguel Angel Gil Marin who owns a 51% share of the club. Other shareholders include Enrique Cerezo and Idan Ofer – both of whom own 19% and 39% shares of the club, respectively.

In its 116-year history till date, the club has won many titles. The major trophies which the club has accumulated over the years include 10 LA LIGA titles, 1 European Cup Winners’ Cup and 1 UEFA Europa League.

From the year 2000 – when the club won promotion back to the LA LIGA – to the year 2011 when Diego Simeone was appointed as the manager of Atletico Madrid, Atleti a barren spell in terms of trophies. However, with Diego Simeone as their manager, the fortunes of the club changed as it went on to compete in both domestic as well as European competitions.

Also, while the club played in the Vicente Calderon stadium from 1996 to 2017, the new home stadium of Atletico Madrid is Wanda Metropolitano. The spaciously built stadium has a seating capacity of 68,000 people after it was first renovated following the city of Madrid’s failed bid to host the 2016 Summer Olympics.Atletico Madrid are famous across Europe because of their combative playing style. The club adopts a defensive playing style and never allows the opposition much space in its defensive final third.

This defensive philosophy which follows the thoughts of Diego Simeone. The Argentine once played for Atletico Madrid and currently shows the same fighting spirit on the touchline. Yet another reason why other clubs regard Atletico Madrid is because the Spanish club has showcased its ability to develop world-class players from its academy. The likes of Raul Gonzalez, David de Gea, and Fernando Torres are all products of the Atletico youth system – with the latter two being part of Atletico Madrid squad.

Atletico to become one of the finest strikers of his generation at Real Madrid. David De Gea, meanwhile, became the Spanish # 1 goalkeeper after the retirement of Iker Casillas. However, it is Fernando Torres who holds the greatest respect among Atletico Madrid fans. Even though he left the club to join Liverpool in 2007, Torres came back to join the Atletico Madrid squad in 2015. His 2 nd stint at the club was more successful as Atletico won the UEFA Europa League in 2015/16.

Ever since the arrival of Diego Simeone in 2011, Atletico Madrid has enjoyed a successful spell. Afterwards on the win at the LA LIGA in 2013/14, the club then won both the COPA Del Rey as well as the UEFA Europa League within the next few seasons .

However, everything has happened at the club under Simeone, it can not compete with the success enjoyed by the club in the 1961/62 season. Fiorentina in a two-legged final. Atletico Madrid won its maiden European Cup Winners Cup.

Atletico Madrid vs. Real Madrid has been one of the most titillating rivalries between any two European clubs. Champions League final at the hands of Real Madrid in 2013/14 and 2015/16 .

The first of these two final defeats is especially hard to take for Atleti. They were leading the match 1-0 before a stop-time equalizer from Sergio Ramos. From there on, it was one-way traffic as the likes of Gareth Bale and Cristiano Ronaldo put Atletico to the sword.Owing to the rivalry of Atletico Madrid Vs Real Madrid – with the latter always enjoying more financial clout than the former, the biggest success of Atletico Madrid came in the 1961/62 season when it won the European Cup Winners’ Cup.

The 1995/96 season was also a highly successful one for Atletico Madrid as it won both the LA LIGA as well as Copa Del Rey in the same season. In the 2012/13 season, meanwhile, the club went on to win the domestic cup and completed a double by winning the UEFA Super Cup.

Unfortunately for Atletico Madrid fans, the time hasn’t always been kind to the club they support. For instance, in the 1999/00 season, Atletico finished 19th in LA LIGA table and were therefore relegated to the 2nd division.

That was a highly turbulent time for the Los Rojiblancos as they spent two years in the Spanish 2nd division before earning promotion back to LA LIGA in 2001/02 season. Since then, the lowest Atletico has finished in LA LIGA was the 12th place finish which they had in the 2002/03 season.OMG moments and events for fans and haters of the club are plenty.

The most shocking moment in the history of the club came in 1999/00 season. After suffering a record 18 defeats that season, the club were relegated to Spain's 2nd

In the rivalry involving Madrid Real Madrid Vs Atlético Madrid, in 2013/14 and 2015/16 seasons as Real Madrid defeated Atlético twice in the Champions League finals.

The most embarrassing home defeat for Atletico Madrid came against Barcelona at the Vicente Calderon Stadium in 2006/07 season.

The worst ever season in the history of the club what the 1999/00 season has 18 defeats. Unsurprisingly, Atletico Madrid were relegated at the end of that season.

One embarrassing moment for the club which most fans remember is their recent trouncing at the hands of Juventus in the 2nd leg of the Champions League 2018/19. Atletico Madrid were stunned by Juve's Cristiano Ronaldo trick who turned the tie on his head.

Atletico finished the 1999/00 season at 19th place and were duly relegated from LA LIGA.

In its 116-year history, no other season comes close to the 1929/30 season in this respect. The club managed to score a paltry 32 goals in the league that season.

In the 1952/53 season, Atletico conceded 70 goals in the league – the club has conceded in a single season to date.

Atletico Madrid managed to put just 12 points on the table in the 1929/30 season. However, due to fewer teams in the competition then, the Atletico Madrid fixtures – like those of other clubs – were a mere 18.

Atletico Madrid lost 18 times in 1999/00 season. Given the bad state of affairs that they found themselves in back then, it should be unsurprising to note that the club were relegated at the end of that season.

In the 1929/30 season, Atletico oversaw their worst ever season at home. The club manages to win 5 games at home all season.

Surprisingly, in the whole of 1929/30 season, Atletico were unable to win a single game away from home.

The biggest victory in the history of Atletico Madrid came in 1955/56 season when they thumped Hercules with a 9-0 win. Two years later, it was UD Las Palmas who were at the receiving hand as Atletico Madrid once again came with 9-0 winners.

Atletico Madrid squad once again conquered Spain after a two-decade hiatus as they won the LA LIGA title in 2013/14 season.

In terms of points, the club's most successful season came back in 1995/96. They accumulated 87 points that season to win LA LIGA in style.

The most expensive player which the club has signed is 2 . The 19year-old Portuguese international joined the Atletico Madrid squad in the summer of 2019. The club had to pay a transfer fee in the region of € 126m to lure the Portuguese to Wanda Metropolitano.

The biggest moment in the history of Atletico Madrid, till date, came in 1962 when they defeated Fiorentina to win the club's first and only European Cup Winners' Cup. The final took place over a 2-legged tie – with Atleti coming across as a 4-1 winner.Ever since the arrival of Diego Simeone in 2011 – which coincided with the Atletico Madrid squad undergoing a rewamp, the club has enjoyed a successful spell. Afterwards on the win in the LA LIGA in 2013/14, the club then won both the COPA Del Rey as well as the UEFA Europa League within the next few seasons .

However, despite everything that has happened at the club under Simeone, it can not compete with the success enjoyed by the club in the 1961/62 season. Fiorentina in a two-legged final. Atletico Madrid won its maiden European Cup Winners Cup.

Atletico Madrid vs Real Madrid has been one of the most titillating rivalries between any two European clubs. Champions League final defeats at the hands of Real Madrid in 2013/14 and 2015/16 .

The first of these two final defeats is particularly hard to take for Atleti. They were leading the match 1-0 before a Stoppage-time equalizer from Sergio Ramos forced the match to extra time. From there on, it was one-way traffic as the likes of Gareth Bale and Cristiano Ronaldo put Atletico to the sword.Barcelona, ​​but there are some quirks about Atletico Madrid as a club.

Diego Simeone's ‘ Cojones' Celebration:   After his team scored the 2 nd goal in their first leg of the match against Juventus in the Champions League quarter-final in 2019, Atletico Madrid manager Diego Simeone had announced his pleasure with an ‘obscene' cojones' celebration from the touchline.

Losing Players in Spanish Civil War : In the Spanish Civil was that tore the country apart from 1936-39, the Atletico Madrid squad lost 8 of its players.

Atletico have been defeated in the 1972/73 European Cup, Atletico were defeated in the final at the hands of Bayern Munich. However, in the succeeding Club World Cup – a competition where all continental champions participate, the German side refused to play against a belligerent Independiente side which was notorious for its foul play. UEFA intervened and gave Atlético Madrid the chance to play in place of Bayern. Atletico took full advantage of the god-gifted opportunity as they defeated the Argentine side to lift the Club World Cup in 1974.

Missed penalty led Atletico to relegation : On the final matchday of 1999/00 season, Atletico was facing Real Oviedo. The club knew did If They Could be able to win the game, They would survive the drop to the Spanish 2 nd tier. Jamie Floyd Hasselbaink has failed to convert to a penalty.

Atletico's two years in Hell : Described as dos años en el Infierno in Spanish, the two seasons Which the club spent in Spanish 2 nd division at the start of the 21 st century are known among the Atletico Madrid squad and fans as two years in hell.

Current Atletico Madrid stadium was not built for them : Wanda Metropolitano, the new stadium of Atletico Madrid, which was not built to house them. Instead, it's part of the city of Madrid's unsuccessful bid to host the 1997 Athletic Championships .Information provided includes age of players, playing time, goals conceded, matches with no goals conceded, substitutions, yellow cards, red cards, yellow-red cards.