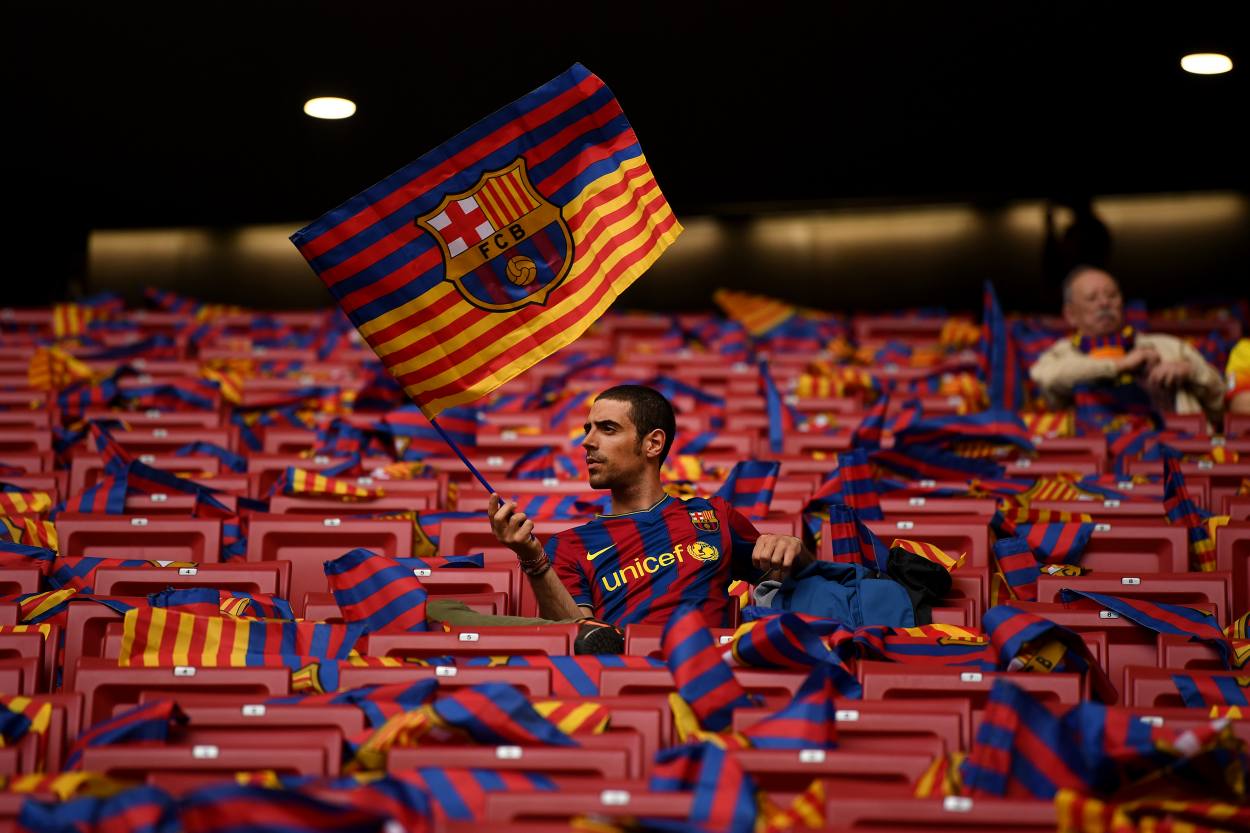 FC Barcelona Team Profile – In 1899, football pioneer Joan Gamper ran a full-page advertisement inviting bids from football enthusiasts who were willing to invest their money to form a football club. Eleven other partners responded to the advert and FC Barcelona came into being.

Within three years of their birth, FC Barcelona lifted their first trophy in the shape of Copa Macaya. Since then, the club has never looked back. Apart from Winning 5 Champions League and 3 FIFA Club World Cup titles, Barcelona have won the LA LIGA a record 26 times, more than any other club.

A lion's share of these titles have come up in the 21st century in general and after the arrival of Lionel Messi in particular. So dominant have Barcelona been on the domestic front in the decade between 2009 and 2019, the club has finished first in eight of 11 LA LIGA seasons.

As for their ownership, Barcelona, ​​like their fierce rivals Real Madrid, are organized as a registered association. That means that most clubs in Europe, no single owner can buy the club, with individual members who are called “Socios” in Spanish acting as its shareholders.Although their tiki-taka style of play is quite famous, what isn’t as popular is LA Masia, the academy which gave birth to this style of football and which has been producing players of the likes of Lionel Messi, Andres Iniesta and Xavi Hernandez.

La Masia was founded by Dutch and Barcelona legend Johan Cruyff in 1979 who was impressed with the academy system of Dutch club Ajax. Cruyff thought that by making his own changes to Ajax's style of play. The style of play by Cruyff and Nourished by La Masia in 2010 Messi, Xavi Hernandez and Iniesta were named as the three best players on the planet by FIFA.

That kick-started a four-year era during which the La Masia Academy dominated FIFA's annual award ceremony. During that time, at least two of La Masia's graduates were nominated among the three best players in the world every year.

Furthermore, in addition to helping FC Barcelona, ​​LA Masia has also helped the national Spanish side. NY Times noted in the 23-man squad that helped Spain win the FIFA World Cup in 2010, 9 players had come from La Masia.

What's more, apart from churning out world-class players, La Masia has produced one of the best modern-day coaches at Pep Guardiola. La Masia graduates are influencing it from the field as well.

The most shocking defeat in the history of Barcelona came in the 1994 Champions League final against Milan in which they were pummeled by 4 goals to nil.

Although Barcelona supporters are aware of being called “cules” in Spain, most of their worldwide supporters do not know that word mean “ass” in Catalan.

Despite signing for Barcelona and representing the club in a pre-season fixture, Alfredo Di Stefano, arguably one of the greatest footballers in history, ended up at Real Madrid in a transfer that humiliated the Catalans and then Marti Carreto to resign.

Real Madrid, the biggest rivals of FC Barcelona, ​​have won more Champions League titles in the 21st century than Barcelona have managed in their 120-year history.

After conceding 4 goals in the 2nd leg of their 2018/19 Champions League quarter-final against Liverpool, Barcelona were at the receiving end of the 2nd biggest comeback in the history of the competition.

With just 14 teams in the LA LIGA at that time, Barcelona finished the 1941/42 season at 12th spot, just one place to relegate Alicante side.

In Barcelona's 120-year history, no other season comes close to the 1928/29 season in this respect. With the roster containing only 10 teams, Barcelona managed to score a mere 23 goals in the league that season.

In the 1941/42 season, Barcelona conceded 66 goals in the league – the club has conceded in a single season till date.

In a 38 fixture LA LIGA season, Barcelona have never gone below the 39 points which they manage to put on board in the 1987-88 season.

With 20 teams competing for the title, Barcelona were able to win 15 matches throughout the 1987/88 season.

With the league comprising 10 teams back then, the 1930/31 season saw Barcelona recording the fewest wins at home in their history.

With the league only 10 teams back then, the 1930/31 season saw Barcelona recording the fewest away from home in their history.

In the 2012/13 LA LIGA season, Barcelona made history by putting 100 points on the board – a record which has no parallel in the history of Spanish football.

Lionel Messi, Xavi Hernandez and Andres Iniesta were in the 2010 Balloon D'Or ceremony were from Barcelona.

Apart from Barcelona has no titles in a calendar year. The club manages to do that in the 2008/09 season.Ask any Barcelona fan about the greatest moments in the history of the club, and they’d inevitably point to the 4-year era between 2008 and 2012, during which Barcelona broke 40 national, continental and European records, as the best time that there ever has been to be a Barcelona supporter.

With Messi at his absolute peak and the likes of Andres Iniesta and Xavi Hernandez at their passing best, Barcelona won 14 of the 19 trophies they contested during this era. That includes six trophies in the opening 2008/09 season in which Barcelona won everything that came in their way.

In 2009/10 season, they amassed a record 99 points to win their first league title at home since 1993/94. Next year saw the club go one better as in addition to retaining the league, they went on to win the Champions League. And while Barcelona missed out on the League in the last of the four-year spell, they were still able to win four major trophies that season.

However, like all clubs, Barcelona have also seen plenty of rough times in their history

One of the biggest regrets that the club’s hierarchy has was the failure of its predecessors to sign Di Stefano, one of the greatest players of the 20th century. However, it isn’t the pain of missing out on the world-beater which caused panic among Barcelona ranks.

Instead, it was the fact that Di Stefano moved to Real Madrid and helped them win five European titles which pains the Barcelona faithful more. That too during a time in which Barcelona were struggling to reproduce their past glories at the newly built Camp Nou.

Had that not been the case, some Barcelona fans allege, the rivalry involving Real Madrid Vs Barcelona wouldn’t have seen the former amassing a record 13 Champions League titles whereas Barcelona lag far behind with 5 of their own.Although Barcelona have seen turbulent times in their history, none of them come close to the decade of the 1930s during which the club faced one crisis after another in a series which threatened to almost unravel the whole Barcelona project.

That decade started ominously for Barcelona with its founder Joan Gamper committing suicide in 1930. Although the reasons behind Gamper taking his own life were personal and financial, that, combined with the 1929 Wall Street Crash, hit the Catalan club hard.

To add further insult to injury, the then Barcelona President Josep Sunyol was murdered in 1936. He was a symbol of the Spanish-left against the excesses of Franco regime and it was the dictator’s troops who executed Sunyol on Franco’s orders on August 6, 1936.

Two years later, Barcelona were further plunged into crisis. The club’s main offices were bombed in attacks which many suspected were carried out at the behest of the Franco regime. Soon thereafter, Franco ordered Barcelona to change the design of their logo and remove Catalonia’s symbol from it.

A few years later, the club was forced to change its name as well. Ever since its inception almost 30 years ago, Barcelona’s name – FC Barcelona – was a symbol of Catalan resistance. Upon securing the government, Francois made sure that the name was changed to CF or ‘Club de Football’ Barcelona.Here are some of the fun facts which you might not know about FC Barcelona:

“Forced to change the name:” Under the Franco dictatorship, the club were forced to change their name from Football club Barcelona to ‘Club de Futbol Barcelona’ in a bid to root out the Catalonian connection of the club. The club was forced to carry this name until after the death of Franco in 1975.

“Reasoning behind Cules nickname:” The term – which means “ass” in Spanish – dates back to the early 1920s when Barca’s stadium wasn’t big enough to house all its fans. Some of the fans started sitting on the walls that surrounded the pitch – and in the meantime, their backsides were bare for the passers-by to see. That resulted in fans of other stadiums referring to Barca fans as Cules.

“Losing 11-1 to Real Madrid”: Throughout his tenure, Barcelona was one of the most hated clubs of the Spanish dictator Franco. That hatred came to the fore when, in the 2nd leg of 1943 Copa Del Rey, the entire Barcelona squad was threatened by local police to lose a game against Real Madrid. That led to one of the most lopsided games in the rivalry with Barcelona losing that game 11-1.

“Pig’s head gate:” The rivalry of Real Madrid Vs Barcelona reached new heights when Luis Figo, the famous Barcelona forward, signed for the Los Blancos in 2000. Two years later when Figo made his first appearance at Camp Nou in Real Madrid colors, among other things a pig’s head was thrown in his direction by angry Barca fans.

“English flag in the logo”: The reason why the top left corner of FC Barcelona’s logo is populated by the English flag lies in the fact that both Catalonia and England share the same saint patron, Saint George, though he is known as Saint Jordi in the Catalonian native language.

“The colossus that is the Camp Nou”: Despite being constructed more than half a century ago, Camp Nou is a formidable structure. Apart from the fact that it contains almost 100,000 seats, more than 100 doors lead into the Camp Nou Stadium and there are 50 emergency exits from it.

“11 Players, 11 Languages”: According to the official Barcelona site, there came a time during the 2014 season when 11 different languages were being spoken in the club’s dressing room. Apart from the major European languages, some Barcelona players were able to speak Arabic, Bassa and Croatian.

“Contract signed on a napkin”: As famous Spanish journalist Guillem Ballague notes in his book, the first contract which Lionel Messi signed with Barcelona was on a small piece of napkin. That’s because the then Barcelona Technical Secretary feared that if the club waited any longer, Real Madrid could snap Messi.

“€700 million release clause”: Ever since he started playing for the club, not many Barcelona transfer news have linked Messi away from the club. Ever wondered why that’s the case? That is, because, the Argentine has a massive release clause of 700m euros.

“Everybody should learn Catalan”: Legend has it that back when he was the President of the club between 2013 and 2010, John Laporta inserted a clause in the contract of every incoming player which made sure that he learned the Catalan language as soon as possible.Details are provided on the age of players, games played, minutes played, goals conceded, games with no goal conceded, SUbstitutions yellow cards, red cards, yellow-red cards.