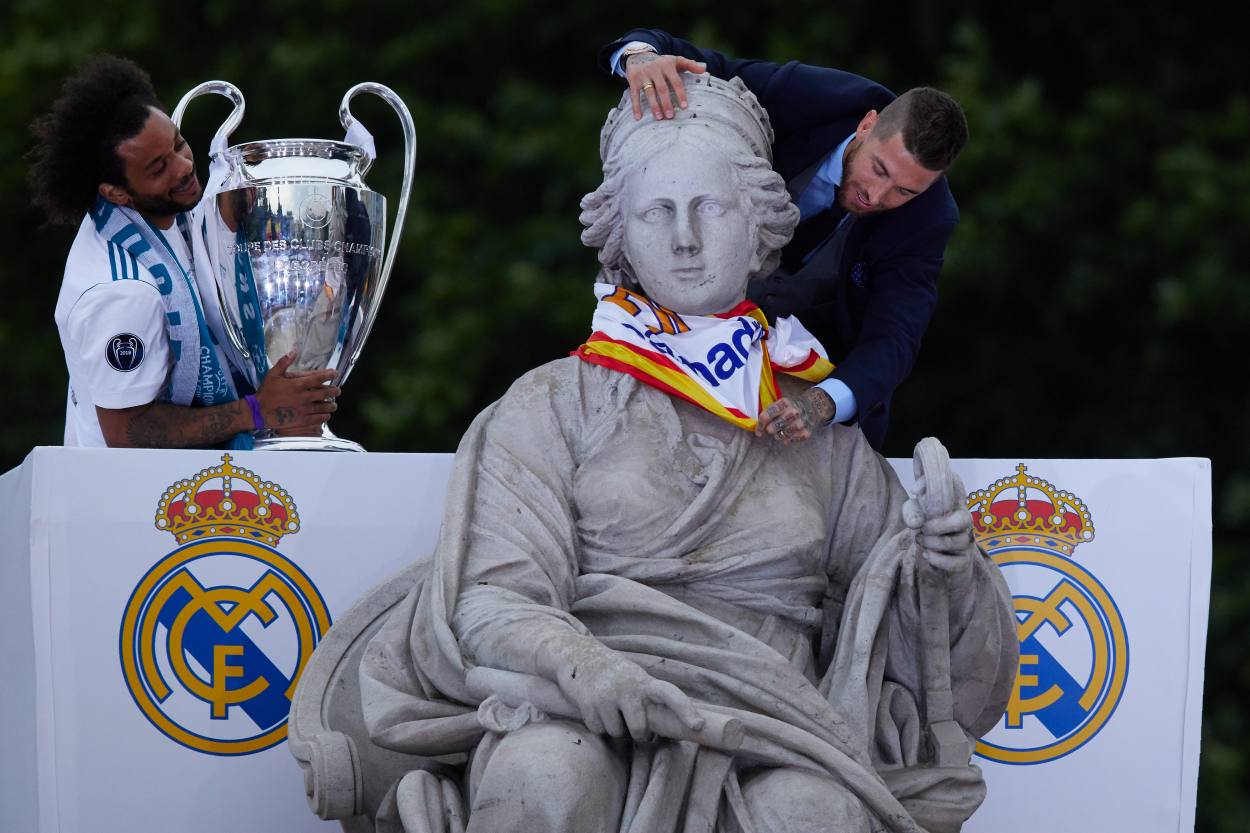 In 1902, football enthusiast and the soon-to-be founder of Spanish Football Federation Juan Padros joined his hands with a group of other people to form “Madrid Football Club”, a club which came to be known as Real Madrid after the Spanish king Alfonso XIII bestowed it with the “Real” (or royal in English) surname in 1920.

The preparations for the founding of the club had begun two years before its coming into being, It was in the year 1900 that Julian Palacios, another of the founding members of Real Madrid, had called a general meeting to select a group of players which would go on to represent the club.

For a club that has always enjoyed close connections with the Spanish royalty, it is perhaps fitting for Real Madrid to dominate not only the European but also the world football scene. After all, the Whites have won more Champions League (13) and FIFA Club World Cup (4) titles than any other team in history.

On the backdrop of their world dominance, it shouldn’t come as a surprise for anyone to note that Real Madrid have an upper hand in the Spanish domestic league too, with not even Barcelona coming close to matching their haul of 33 LA LIGA titles.For a club that has enjoyed huge spending power for much of its history, it shouldn’t come as a surprise that Real Madrid are known for their ability to lure world-class players – or “Galacticos” in football parlance – from all over the world.

In addition to being extremely talented, only those players earn the tag of a Galactico who command a hefty transfer fee on their move to Madrid and are supremely famous among the football fans. Also, while the word has existed since times immemorial, it was only popularized during the 2000s when the then Real Madrid president Florentino Perez encouraged the policy of signing top-quality players.

Consequently, while Real Madrid have signed star players throughout its history, the Galactico era is only a recent occurrence, with football fans dividing it into two phases. The first of these epochs took place during the 2000s when Real Madrid went on a spending spree that saw them signing the likes of Luis Figo, Zinedine Zidane, David Beckham, and the Brazilian Ronaldo.

Following the ouster of Perez as club President in 2006, the second Galactico era began with his return as the Real Madrid president in 2009. With Pep Guardiola taking his Barcelona team to new heights, Perez once again opened the spending tap. That, in turn, allowed the Los Blancos to bring in the likes of Cristiano Ronaldo, Kaka, and Gareth Bale – with Eden Hazard being the latest member of the Galactico club.

In a 38-game LA LIGA season, Real Madrid have never fared poorer than the 1999-2000 season which they finished at 5th position in the league. Overall, the club has never finished below 11th, a place which they found themselves in at the end of 1947/48 season.

In Real Madrid 120-year history, no other season comes close to the 1930/31 season in this respect. With the roster containing only 10 teams, Real Madrid managed to put the ball in the back of the net a mere 24-times that season.

More than two decades after its attack had suffered its worst year in front of goal, it was the turn of Real Madrid defense to go missing. In the 1950/51 season, Real Madrid conceded a record 71 goals in the league.

It was in the 1947/48 season that Real Madrid scored only 41 and conceded a whopping 56 goals to have their worst ever goal difference of -15.

In a 38 fixture LA LIGA season, Real Madrid players have always earned more than the 45 points which they got in the 1993/94 season.

The start of the new millennium wasn’t exactly an exciting time to be a Real Madrid supporter, with the club managing only 16 wins in the entirety of the 1999/00 LA LIGA season.

Once again, it is the 1999/00 season which stands out in this regard. With victories hard to come by for Los Merengues, defeats were plentiful as they suffered a record 14 defeats in the league that season.

With the league comprising of only 10 teams back then, it is perhaps unsurprising that  Real managed to win a mere 5 games at home in the 1929/30 season.

Real Madrid have won 13 Champions League titles in their history, the latest of which came vs Liverpool in 2018/19 season. Despite this, it was their victory in the 2014 Champions League final – which saw the club lifting its 10th European Cup, which is ranked right up there among the sweetest successes in the history of Los Blancos.

There are two specific reasons why their 10th Champions League title is held in such high esteem by the Real Madrid faithful. First, coming into that game, the strength of the Real Madrid squad meant that they were regarded as clear favorites against city rivals Atletico Madrid.

However, after scoring early in the game, it were Atletico Madrid who looked destined to win their first-ever Champions League title. It was only after Sergio Ramos scored a goal in the 93rd minute – after which the likes of Bale, Marcelo and Ronaldo 7 scored in extra time – that Real made the trophy their own.

Secondly, by winning the La Decima, Real Madrid managed to put the agony of the previous three seasons – in which they were eliminated in the quarter-final stage – behind them and kicked off a glorious era which saw the Real Madrid squad winning 4 Champions league titles in a row, the last of which they won vs Liverpool with a comfortable

One such moment came during the 1982 UEFA Cup semi-final in which Real Madrid were facing West German minnows Kaiserslautern. Despite being the clear favorites, the Real Madrid players went into the game in a rash mood, a decision which saw three of the players seeing a deserved red card.

Kaiserslautern couldn’t have hoped for anything better coming their way as they pummeled their guests with five goals to nil. So huge was the margin of defeat that even after Real won the 2nd leg 3-1, they were still eliminated from the competition from a side whose name not many fans even remember.Because it came immediately after the club had won 4 Champions League titles in a row, it is the 2018/19 season that could be easily categorized as one of them – or even the – worst season in the entire history of Real Madrid.

Having appointed Julian Lopetegui as the successor to Zinedine Zidane and following the departure of Cristiano Ronaldo to Juventus in the summer, the Real Madrid higher-ups knew that the season was going to be tough. What they couldn’t have imagined, however, was that before the season ended, Zidane would be back as Real Madrid manager after seeing two of his successors sacked in less than ten months’ time.

So woeful was the season for Real Madrid that the club suffered more defeats in La Liga (12) than at any other time since the 1973/74 season. Furthermore, there came a period during the season in which the club failed to score a goal for 465 minutes, a club record for profligacy.

On top of that, Barcelona finished the season with a 19-point lead over Real Madrid, the biggest ever it has managed throughout its history. Also, by managing to score only 63 goals in La Liga, the club enjoyed its worst season in front of goal since 1999/2000 season.

Little wonder, then, given the performances that were put in front of them, most match-going fans opted against attending home matches. That decision resulted in the Santiago Bernabeu witnessing its attendance figures falling to their lowest level in the 21st century.Here are some of the fun facts which you might not know about Real Madrid:

“Friends with the Spanish King”: Not many Real Madrid supporters are aware that the original name of the Spanish giants was Madrid Football Club. It was only due to the club’s friendship with the then Spanish King Alfonso XIII that the term “Real” – which means “royal” in Spanish – was added to their name.

“Disappearing of the crown”: During the Spanish Civil War, the crown in Real Madrid’s logo, as well as the word “real”, were dropped. It was only after the end of the war that both the “real” word as well as the logo reappeared.

“Could have won more”: Even though Real Madrid won five successive Champions League titles between 1955 and 1960, the club could have done more had it been allowed entry into the 1961 Champions League competition, which they were denied because the current rule – which states that reigning Champions get automatic entry into next season’s competition – didn’t exist back then. Instead, with only domestic champions being allowed to enter, it were Barcelona who took part in the competition.

“Depriving Barcelona of De Stefano”: Alfredo de Stefano, arguably one of the greatest players in the club’s history, was first signed by FC Barcelona. It was only after the intervention of Spanish dictator Franco – who took advantage of a shady clause in the contract of the player with his previous club – that the Argentine ended up at Santiago Bernabeu.

“One match, three red cards”: During their quarter-finals of the 1982 UEFA Cup against German side Kaiserslautern, three Real Madrid players were red-carded due to rash tackles. Expectedly, the opposition took full advantage of this and came out as 5-0 winners from the game.

“Can’t play here”: When the Spanish Civil War broke out and LA Liga was suspended, Real Madrid tried to play in the Catalan Republic League which was free from suspension. Alarmed at the prospect, Barcelona vetoed the move and Real weren’t able to play domestic football for nearly half-a-decade.

“Numbers on the back”: Real Madrid were the first Spanish team which decided to add numbers to the back of their shirts. The club did that in a match against Atletico Madrid on November 23, 1947.

“Still lacking a treble”: Despite all the on-field successes which the club has enjoyed in its illustrious history, Real Madrid are one of the few big teams in Europe who have never won three trophies in a single season.

“Trophies in first and last game”: David Beckham, the iconic English midfielder which Real Madrid signed from Manchester United, only won two trophies during his four-year stay at the club. Interestingly, while one of those trophies (the Spanish Supercopa) came in his very first match for the club, the 2nd (La Liga) was won on Beckham’s last appearance for Los Blancos.