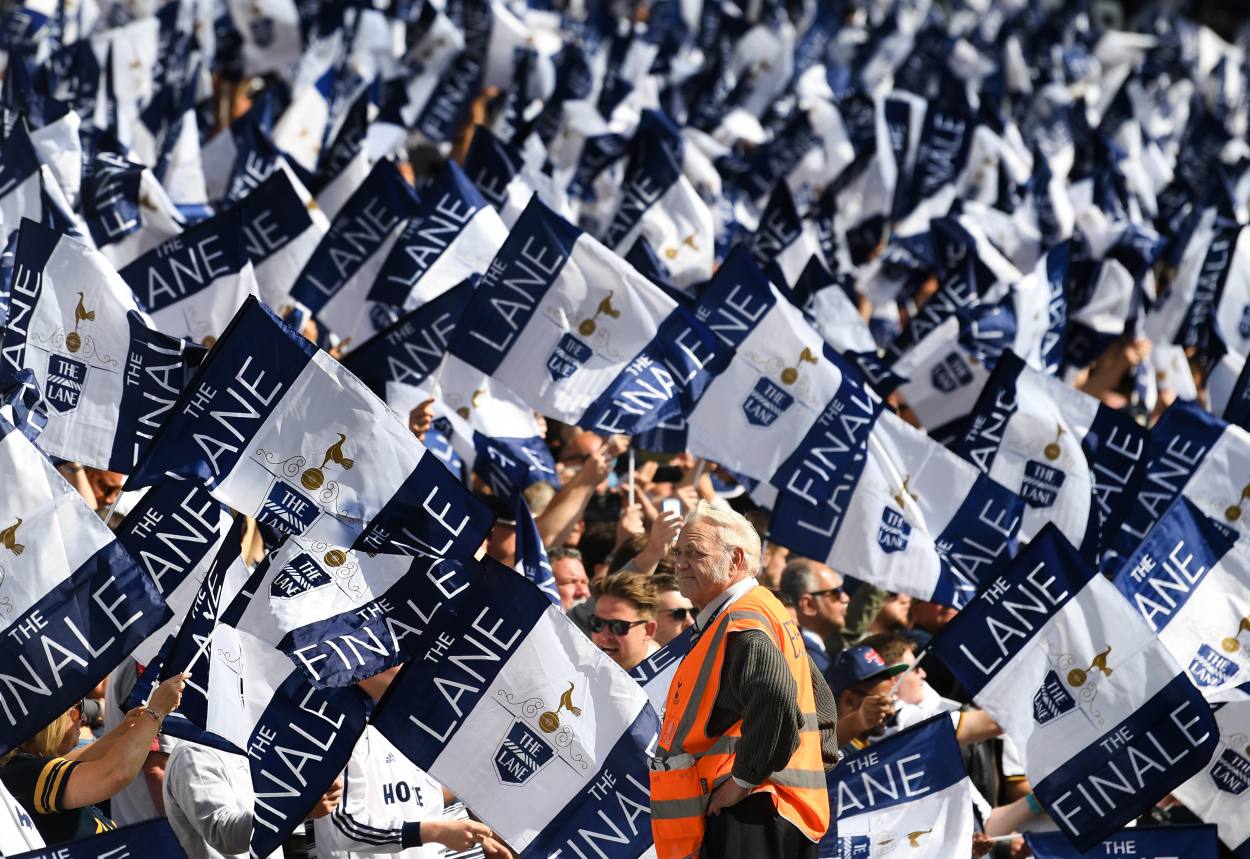 In 1882, a group of schoolboys from St. John’s Middle Class School and Tottenham Grammar School decided to form a football club. Mostly aged between 13 and 14, the boys wanted to play football because, as the legend goes, it would convince their parents to let them play outside in winter months.

Once they had formed the club, there arose a question about its potential name. Ostensibly, to avoid confusion with a team which had been formed earlier, the group decided to simply call it “Hotspur”. A year later, the club changed its name to Tottenham Hotspur which it carries to this day.

A decade passed and Spurs, which were now well-financed thanks to the 1p its owners charged everyone who wanted to attend their games, were elected to the Southern Division League One in 1895. That was followed by their move to White Hart Lane, Tottenham’s former stadium, in 1899.

That move proved to be ominous for the team. After winning the Southern League in 1900, it went on to win the FA Cup the following year, becoming the first non-league team ever to lift that trophy. The cup victory helped Spurs get elected in the Second Division of Football League in 1908.

The club proved the decision of football authorities right as it earned promotion to the First Division at the first time of asking in 1909. In later years, they went on to become the first British team to lift a European trophy, while also winning the first UEFA Cup ever organized. The club has also won eight FIA Cups, four League Cups, two UEFA Cups and one Cup Winners’ Cup in their history.From cashless transactions to state-of-the-art beer dispensers in what is Europe’s longest bar – and the doing-away with single-use plastic straws – Tottenham new stadium, called the ‘Tottenham Hotspur Stadium’, is a marvel in its own right.

When the construction of the stadium began in 2017, it was estimated that it would cost Spurs in the region of £400 million. However, due to repeated delays and several other technical issues, the final cost sky-rocketed to a whopping £850 million, making it the most expensive stadium ever built.

Not that Spurs are complaining, though. Apart from having the sitting capacity of more than 62,000 fans, Tottenham’s new home contains a 180-bedroom five-star hotel, a 65-meter bar which equals the length of the goal-line and counters where transactions are totally cashless.

Other than that, the stadium is the first and the only one till date which has its very own Microbrewery inside its premises. Experts who designed its football pitch claim that in less than half-an-hour – 25 minutes, to be precise, ground workers could convert it to an artificial NFL surface.

Among the other offerings is a public square outside the stadium which the club claims are a ‘’focal point for community and supporters”. Then there is what Spurs’ refer to as a “Sky Walk” – a visitor attraction which gives the fans the opportunity to climb the stadium’s exterior up to 40 meters high.

During the first 18 years of Arsene Wenger in England, the Gunners enjoyed a monopoly in the Arsenal Vs Tottenham rivalry. The Lilywhites didn’t manage to finish above Arsenal even once during this period.

The Arsenal’s Invincibles, the squad which went the whole of 2003/04 Premier League season unbeaten, sealed the title by winning at White Hart Lane on the last day of the season.

Despite finishing fourth in the 2011/12 season, Spurs weren’t able to take part in next season’s Champions League. The reason? Chelsea, who had finished 6th in the Premier League that campaign, had won the Champions League to take that final spot away from Spurs.

Willian, the Brazilian winger who would go on to score 2-goals to dump Spurs out of the 2017 FA Cup semi-final, was almost signed by them 4 seasons ago, only for Chelsea to hijack the deal even after the player had undergone a medical with the Lilywhites.

With Tottenham needing to match Arsenal’s result to qualify for next season’s Champions League, their players fell victim to food poisoning ahead of the final day of the 05/06 season. The result? West Ham defeated a literally ill Spurs side 2-1 whereas Arsenal won their own game to book their place in Europe’s elite competition for the following campaign.

After being relegated from the top tier of English football two years ago, Tottenham finished the 1929/30 season at 12th place in the 2nd division.

Tottenham Hotspur were able to score only 38 goals in the whole of 1987/88 season. To this day, it remains the worst tally of goals the club has scored in a full season.

Unsurprisingly, given they were relegated at the end of that season, Spurs conceded a whopping 90 goals (their most ever) in the 1914/15 season.

After scoring a respectable 57 bit conceding a mammoth 90 goals, Tottenham finished the 1914/15 season with a humiliating goal difference of -33.

During the whole of 1914/15 season, Spurs managed to put just 28 points on the board. Unsurprisingly, they were relegated at the end of it.

Once again, it is the 1914/15 season that stands out in this regard. Spurs managed to win only 8 games all season during that campaign.

During the 1934/35 season, Tottenham lost 22 fixtures in the league – their worst ever tally of defeats in a single campaign till date.

During the 1914/15 league campaign, Tottenham managed to win a single game away from home all season.

Tottenham are the first British club to win the European Cup Winners Cup and UEFA Cup. They managed to do that in the 1963 and 1972, respectively.

Tottenham hold the record of playing the most number of matches in UEFA Cup/UEFA Europa League by a British club.

Spurs were the first side to win the double of FA Cup and League in the 20th They claimed that accolade in the 1960/61 season.

The Lilywhites have scored the most number of goals in a single Premier League game (9). They share that record Manchester United.

Despite not signing a single player in the preceding two windows, Tottenham managed to reach the Champions League final in the 2018/19 season.The greatest moment in the history of Tottenham Hotspur football club came at the end of 1963 season when it defeated Spanish side Atletico Madrid to lift the European Cup Winners’ Cup. Most Tottenham fans of today weren’t even born to witness that glorious day. Yet, the passage of time cannot water-down the significance of what happened in Rotterdam that evening.

Prior to that day, no other English side had managed to win a continental trophy before. The Liverpool side of the 70s and 80s was still a decade away and so it was Spurs who opened the floodgates of European trophies for English football. And they did it in style.

To further sweeten their delight, it wasn’t an underwhelming Atletico Madrid side which Spurs had defeated. Instead, they ripped apart the side which came into that season’s competition as the reigning champions. Only a year ago Atletico Madrid had lifted the trophy by defeating Fiorentina in the final. This time, however, luck was against them as the Spurs came out of that game as champions of Europe.

Thirty-four years from that day, Spurs were handed one of the biggest defeats in their history.

When the fixture list was announced for the 1997/98 season, Spurs were handed a tricky away trip to Newcastle during the busy Christmas period. The Magpie squad of that season was a far cry from the team which we now see taking turns in the Premier League and the Championship. It had an assemblage of world-class players including Alex Shearer, Les Ferdinand, and Keith Gillespie. In contrast, the Spurs lineup that season consisted of forgettable names like Andy Sinton, Ruel Fox, and David Howells.

As the game started, it didn’t take long for the difference in quality between both sides to become obvious. Starting from a Shearer goal on the 20th-minute mark, Newcastle scored 2 more goals ahead of the half-time interval to put the game beyond doubt. With Spurs’ players already waving the white flag, Newcastle, who were winless in their last seven games, went in for the kill.

Managed by Kevin Keegan whose teams were always famous for their attacking prowess, Newcastle scored 4 more goals in the 2nd half to make the scoreline a humiliating 7-0 for the away side. Spurs did manage a consolation goal 1-minute before 90. However, as anyone aware of the basic rules of mathematics could tell, that was too little too late for the side from North London.[svc_carousel_layout car_autoplay=”yes” loadmore=”yes” grid_link_target=”nw” dexcerpt=”yes” dmeta_data=”yes” dsocial=”yes” query_loop=”size:16|order_by:date|order:DESC|post_type:post” grid_thumb_size=”200X172″ svc_class=”bigger-slider” title=”Mehr Stories von Ligalivenet”]On the night of May 6, 2006, Tottenham Hotspur were on the verge of dinner happened.

Since the game was to be played on Sunday, protocol dictated the Spurs’ squad to spend the Saturday night at Marriot, London. A delicious buffet was laid out by the chef, who advertised that every player was to be served in their room with a dish of their choosing. Unfortunately for Spurs, the majority of the players chose lasagna – a decision which ended up costing the club a Champions League spot.

On the morning of the game day, those who saw Spurs midfielder Michael Carrick said he could barely walk. The condition of other players was equally merciful. So drastic was the situation that Daniel Levy, Tottenham chairman, telephoned Premier League’s CEO Richard Scudamore to talk about the possibility of a postponement.

Levy was stunned on hearing the answer. Postponement, Scudamore glared during the conversation, would cost Spurs points’ deduction and a potential Premier League inquiry. His answer meant Spurs had only two options – abandon the match and face guaranteed points deduction or field a starting XI containing 10 ill players and hope for a miracle. Levy chose the latter option.

It was a brave choice on their part but West Ham weren’t the team to give Spurs an award for their daring. Within 10 minutes, the home side were 1-0 up, and even though Spurs did pull the game back to level terms with a Jermaine Defoe goal, a Yossi Benayoun strike 10-minutes from time sank any chances of Spurs finishing above Arsenal who had enjoyed a cruising 4-2 win over Wigan.Here are some of the fun facts which you might not know about Tottenham Hotspur

“St. Totteringham’s Day”: During the first 19 years of Arsene Wenger as Arsenal manager, Spurs failed to finish above their North London rivals. This led to some Arsenal fans creating and celebrate St. Totteringham’s Day – the day during which it became mathematically impossible for Spurs to overtake Arsenal in the league table.

“We won the World Cup”: In the 2018 FIFA World Cup, nine Spurs players represented their respective nations at the semi-finals stage, more than any other club in the world.

“Lasagna Gate”: On the final day of the 2005/06 campaign, Tottenham only needed to match Arsenal’s result to overtake the Gunners in the Premier League qualify for next season’s Champions League. As ill-luck would have it, the majority of Spurs squad ended up eating lasagna on the night before the game, after which they succumbed to food poisoning and ended up losing their game.

“Say no to painkillers”: Harry Kane once praised his wife for giving birth to their 2nd child without using any painkillers. This comment saw the English star receiving flak on social media.

“He’s no more”: On the same day in 1919 that Arsenal replaced Tottenham in the First Division, the club’s pet parrot collapsed under mysterious circumstances and later died in the hospital.

“Everybody can pee”: The new Tottenham Hotspur stadium, apart from containing other luxuries, has a record 471 toilets and 773 urinals.

“We hate Spain”: Including their 2018/19 Champions League final appearance vs Liverpool, Tottenham have never won a competitive game in Spain in their history, with their overall record standing at drawn three, lost four.Details are provided on the age of players, games played, minutes played, goals conceded, games conceded with no goals, yellow cards, red cards, yellow cards.