In 1886, David Danskin, a football enthusiast who worked at the Arsenal Ammunition Factory in Woolwich, decided to form a football team in an area which was dominated by fans of cricket and rugby. Not having enough funds of his own, he gathered a group of friends. All 18 of his friends put in sixpence Danskin contributed three shillings to purchase a football club.

Not knowing by which name they should refer to the name of the ‘Dial Square’, which is the name of one of the workshops of the munitions factory. The club was recognized as having been replaced by Royal Arsenal.

However, just like its predecessor, this name did not stand the test of time and what was replaced with ‘Woolwich Arsenal’ in the year 1891. That name held for the next 2 decades – a period during which the club was admitted to the league, won promotion to Division One and went bankrupt.

It was only after English businessman Henry Norris purchased the team in 1910 that was saved from financial oblivion. The purchase of the club was followed by its move to Highbury Stadium and the drop of the term ‘Woolwich’ from its name, earning the club its current name of Arsenal football club.

Currently, Arsenal are the 3 rd most successful club in English football, having won a massive 30 trophies during its lifetime. Apart from winning 13 League titles, the Gunners have lifted the FA Cup a record 13 times in their history, more than any club in English football. They have also lifted 2 UEFA Cups, 2 League Cups, and 1 European Cup Winners’ Cup.

While most Arsenal fans think of the Arsene Wenger era as the most successful in the history of the club, slightly older fans won’t reject the fact that George Graham, the man who managed Arsenal between 1986 and 1995, comes pretty close to challenging Wenger as one of the most successful managers in the club’s history.

When he arrived at the Arsenal scene in 1986, George Graham wasn’t a complete stranger to the Arsenal fan base. Instead, since he had represented the club for six years between 1966 and 1972 as an attacking midfielder – during which Graham had scored 60 times for the Gunners, many Arsenal fans expected good things from a former player now managing the club.

To his credit, Graham didn’t disappoint. While his brand of football didn’t win him many fans – as Graham always opted for a defensive style of play to counter the opposition’s skillset, it was pretty effective. Hence the reason why after winning a single FA Cup in the 14-years before his arrival, the club was able to lift two League titles, two FA Cups and two League cups during the Scot’s 9-year stay at the club.

Much more importantly for the Gunners, the biggest European trophy the club has ever won – the 1993 European Cup Winners’ Cup – was claimed by Arsenal under the tutelage of Graham. The club managed to do it by defeating Italian side Parma 1-0 in a closely contested final.

One of the reasons why Graham isn’t remembered in fine words by the Arsenal faithful is the manner in which he left the club. The Scot was sacked from his job just nine months into the 1994/95 season after it emerged that he had taken a bribe for signing two players from a foreign club. To an otherwise brilliant career, the manner of his departure tainted Graham’s tenure as Arsenal manager.

At the end of 1912/13 season, Arsenal, who had won just 3 of the 38 matches that campaign, were relegated after finishing at the 20th place in the league table. The Gunners then spent two seasons in Division 2 before earning promotion back to the top tier.

In Chelsea’s history, no other 38-match season comes close to the 1912/13 season in this respect. The Gunners managed to score only 26 goals in all games in the league that season.

After scoring only 67 and conceding a whopping 67 goals in the league, Arsenal finished the 1990/19 season with an abnormal goal difference of -30, their worst ever till date.

During the 1994/95 season, Arsenal managed to put just 51 points on board despite the season consisting of 42 games.

In a 38-match season, the Gunners have always managed more victories than the 3 they accumulated during the whole of 1912/13 campaign.

Given the fact that they managed to win only 3 games that season, it should be unsurprising to note that it is the 1909/10 season in which Chelsea suffered their worst home record in the top tier of English football. The club managed to win a single game at home that season.

The greatest Premier League team ever? Asking this question would likely elicit several responses from football pundits. While some of them might rate the Manchester City side of 2017/18 season which put 100 points on the league table as the best, others might point the finger at the treble-winning Manchester United side of 1999-00 season.

One team which would always be mentioned in the answer to this question, come what may, would be the Arsenal side of the 2003/04. That is, because, apart from winning the Premier League title that season, that side went through the whole season unbeaten – an honor no other big club in England can claim to have.

With Thierry Henry spearheading the attack and Bergkamp playing just behind it, it had the likes of Viera and Gilberto adding steel to its midfield, with the likes of Freddy Ljungberg and Robert Pires adding craft to the wing department. However, like any title-winning team, the defense of that Arsenal side was watertight as well.

With both Kolo Toure and Sol Campbell at the prime of their careers, the Gunners conceded only 26 times throughout the whole season. Throw into the mix Ashley Cole and Lauren as their wing-backs – with the former being arguably the best English left-back ever – and the benefit of hindsight makes it easy to gauge the greatness of that team.

However, like day follows night, the extreme success of the 2003/04 season was followed by a decade of mediocrity by Arsenal’s lofty stands.

With the club shifting to the Emirates Stadium in 2006, Arsene Wenger, the same person who had guided the club to unthinkable heights, became a prisoner to his past successes. At a time when the likes of Chelsea and Manchester United were spending money like water, the French manager was forced to run a tight ship to balance the club’s books.

The results of this policy soon became visible for all to see. The same club which had won 3 Premier League titles during the last 9 years wasn’t able to win a single trophy in the next 9, between 2005 and 2014. So toxic the environment became at the club that even Arsene Wenger, arguably the best manager in the history of Arsenal, attracted the ire of the fans.

Therefore, while Arsenal have suffered heavy individual defeats in the past few seasons as well, it was the inability of the club to build-on that staggeringly successful 2003/04 season which could be termed as one of the biggest failures in the club’s history.

Arsenal fans have suffered a lot of heartaches during the long history of the club. None of them, however, comes close to the humiliation which Manchester United heaped on by defeating them 8-2 during a league fixture on August 28, 2011.

Though that does play a huge part, the margin of the defeat isn’t the only thing which makes that game hard to forget for Arsenal squad and fans. It is the weakness of that Manchester United side on paper which makes that defeat all the more bitter for the Gunners’ faithful.

There was no Cristiano Ronaldo, Roy Keane or Gary Neville in that Manchester United side. It was populated by the likes of Tom Cleverly, Anderson, and Danny Welbeck –all of whom were shipped out of the club in the coming years after they had failed to justify their status as Manchester United players.

To be fair to Arsenal, however, it wasn’t that their own starting XI was full of world beaters either. Sure, they had the likes of Robin Van Persie and Andrey Arshavin in the attack. But when it came to their midfield and defense, the presence of the likes of Johan Djourou, Armand Traore and Carl Jenkinson in the Arsenal starting XI hardly filled their fans with any sort of confidence.

Furthermore, while the 8-2 scoreline makes it hard to believe, Arsenal were pretty much in the game even at half time – with the score a respectable 3-1 for the home side. It was only after Wayne Rooney opened 2nd half’s scoring in the 64th minute that the floodgates opened and what looked like a routine defeat at the home of top-4 side turned into a miserable afternoon for the traveling Arsenal fans.

Arsene Wenger: "It was a terrible day."

“Arsenal fan TV”: Social media savvy fans of Arsenal are aware with Arsenal fan TV; a YouTube channel of the club’s emotional fans which rant and rave every time the club puts a foot wrong in any of their games.

“Dial Square FC”: Before 1893 – the year it became a full-fledged member of the football league – the club was known as Dial Square FC.

“We have better history”: In the wake of World War 1, Football League resumed in 1919. Arsenal, which had finished 5th in the second division before the war, were controversially promoted to the top tier after their chairman argued that the club deserved it over Tottenham because the Gunners had a long history.

“Get more visible”: White sleeves have become a compulsory part of the club’s home kit over its history. The club wore it for the first time in the 1930s after their then manager, Herbert Chapman, decided that the contrast of white sleeves and red top made it easier for the players to see each other.

“Battle of the Buffet”: On 24 October 2004, Manchester United defeated Arsenal to end the Gunners’ 49-match unbeaten streak. That set into motion the so-called battle of the buffet – the post-match chaos which saw one of Arsenal’s players throwing a pizza at Sir Alex Ferguson in the tunnel.

“Piers Morgan Twitter account”: Piers Morgan, the English journalist, broadcaster, and television personality, is the self-proclaimed biggest fan-cum-critic of the club. His Twitter feed fills fans of other teams with happiness every time Arsenal loses a game.

“First on radio and television”: When Arsenal took on Sheffield United on January 22nd, 1927, they became the first team to play in a game live broadcast on radio. Ten years later, an exhibition match involving Arsenal’s senior team and their reserves became the first-ever televised football game.

“Wenger out banners”: During the last few seasons of Arsene Wenger at the club, the atmosphere became so toxic that some disgruntled Arsenal fans hired planes to fly over the club’s Emirates stadium with “Wenger Out” banners during the club’s home games.

“First foreign manager”: When Arsene Wenger won the Premier League title with Arsenal in the 1997/98 season, he became the first foreigner to do so. 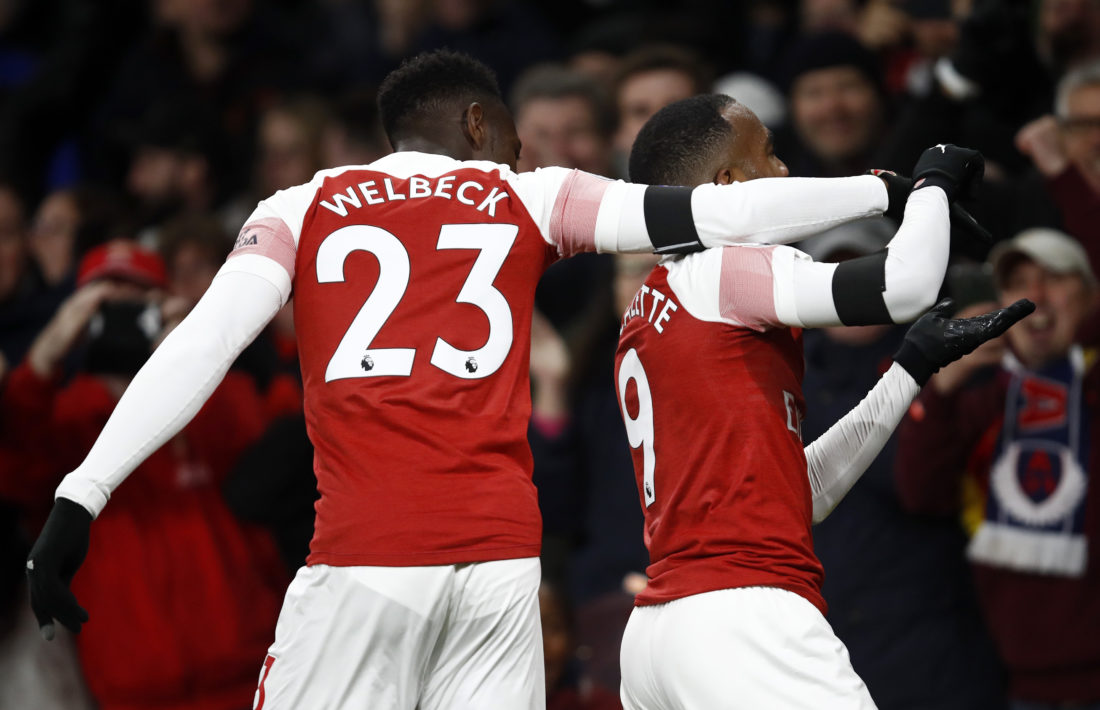