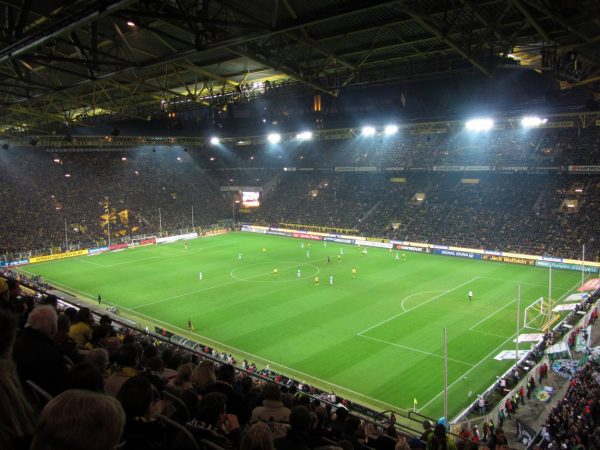 Who is Gio Reyna? The story of Dortmund’s Sunderland-born American midfielder

Introducing Giovanni Reyna – an 18-year-old midfielder currently playing for Borussia Dortmund. As you can see, he has an Italian first name, but he is technically American, and he plays for a German club. Does it get more diverse than that? He actually represents the USA in the international team already, at such a young age. And if you are in any doubt over his talents, we have news for you. He has been listed as a next-gen player according to the 2019 poll completed by The Guardian.

Seems that football fans are aware of the potential of this young man, but where has he sprung from? And how has he ended up playing for Dortmund? Let’s give you a run down right now.

Gio Reyna might currently be based in Germany, but things didn’t start there. It wasn’t always on the books for him to play in the Bundesliga either. So with that said, let’s take a look back and see how Gio Reyna became the player he is today.

Where it all started

Reyna was actually born in Sunderland in 2002. He was born here because his father, Claudio Reyna, was playing for Sunderland FC. However, when his father stopped playing for Sunderland, the family moved back to the United States, where Claudio Reyna is from. This occurred when Gio Reyna was just five years of age. And 8 years later, Reyna joined the local football academy for New York City FC. The family was living in Bedford, NY, so this was a move that made sense for the teenager.

Of course, the NYC academy is where Gio started to really get a taste for football. He joined in 2015 at just 13 years old, and he immediately impressed the coaches. Reyna was actually at the academy for 4 years up until 2019, and it was then that he caught the attention of Dortmund. Having been scouted at some junior games, he was invited to move to the Dortmund academy. This happened when Gio was 17 years of age. It was the first time he would move so far from home to pursue his dreams of professional football. With that said, it seems he has settled in quite well.

Move to the big leagues

As stated above, Reyna joined the Dortmund academy in 2019, at 17 years of age. However, it wouldn’t take long until he was called up to the first team. In fact, this happened less than a year later, in January 2020. He came on and played in a game against FC Augsburg, breaking a record for being the youngest American to ever play in a professional Bundesliga game. The following month, Reyna hit the back of the net for the first time in his professional career. Needless to say, this impressed the coaching staff even more than before.

In that same year, Reyna would also receive a call up to represent the USA on an international stage for the first time. This occurred in November 2020, and much like he did at Dortmund, he immediately made an impact.

The current state of play

Less than a year ago, in December 2020, Reyna was awarded the US Young Player of the Year award. He beat several promising candidates to claim this accolade, and this only fuelled his footballing growth further. Fast forward to the 21/22 Bundesliga season, Reyna was given the number 7 shirt. This is the same number previously worn by a bit of a legend in the form of Jadon Sancho. And just a couple of months ago, on August 27th, Reyna became the youngest player to have ever reached the milestone of 50 Bundesliga appearances.

He is still going strong as an attacking midfielder for Dortmund, and at the time of writing, they are 2nd in the Bundesliga. Undoubtedly, Reyna’s talents have helped them get to this stage and challenge the mighty Bayern Munich for the title. But in addition to this, Dortmund is also looking good to progress through to the Champions League knockout stages.

They are 2nd in Group C, behind Ajax, and Reyna will be hoping to perform well to help them progress. Should the team ultimately achieve this, who knows where Reyna could take his talents on the biggest stage in Europe? He certainly has the ability to shine through and influence the outcomes of games. But the Champions League will be his biggest test to date, and we sincerely wish him the best of luck!

Find out more: Who is Youssoufa Moukoko? All about the Bundesliga's youngest ever player